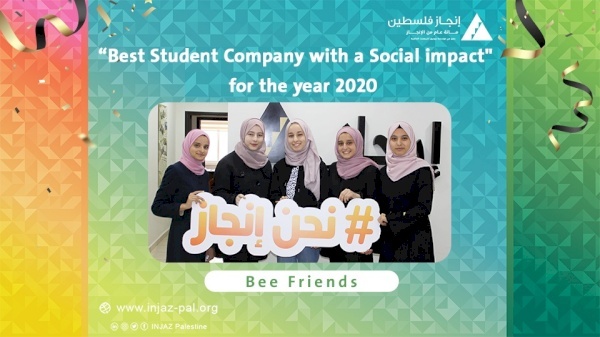 “Bee Friends” Company won the award for the “Best Student Company with a Social impact” for the year 2020 in the INJAZ Al-Arab regional competition “Youth Entrepreneurship celebration” (YEC), which took place virtually on December 10th 2020.

Athar Sterilization and Prevention Company won the “Schneider Sustainability Award” The company was also ranked as the one of the three student companies nominated for the Best Company of the year 2020 award among the university track companies.

This year, 21 student companies from schools and universities tracks in 13 Arab countries participated in the competition that was launched in 2007, with the aim of enhancing and supporting entrepreneurship skills among the Arab youth.

“Bee Friends” from Bedia Girls’ Secondary School from Salfit worked on the production of wrapping fabrics with beeswax. The trainer Fadia Salameh from the Millennium Center for Training and Development supervised the work of this company. Athar Sterilization and Prevention Company from Palestine Polytechnic University worked on developing a smart electronic sterilization device, and it was under the supervision of the trainer Rajeh from Bank of Palestine.

INJAZ works annually, in cooperation with the Ministries of Education and Higher Education, to implement the "Student Company" program, which is one of the organization's flagship programs and falls under the program of entrepreneurship. Trainers from private sector companies play a main role in training the participating students.

The program lasts for a full year, during which students from different schools and universities work to establish real companies with limited capital, and manage them through 5 basic departments in addition to the General Manager. The program ends with a national competition in which student companies compete for the title of "Best Student Company", in order to qualify afterwards. The winning company will participate in the regional competition organized by INJAZ Al-Arab in 13 Arab countries.

It is important to note here that "INJAZ" is an independent Palestinian organization managed and sponsored by a group of private sector companies, and it is a member of the "Junior Achievement Worldwide". It aims to enhance economic opportunities among Palestinian youth by qualifying university and school students to enter the arena of business and entrepreneurship.